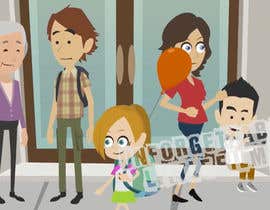 I have a non-profit called Indivisible Idaho and part of what we do is to encourage people to vote, and be politically active. I want to video that follows a young girl as she grows up through the different stages of her life until she reaches adulthood and stops at a podium where she turns around and faces a crowd to address them as president.

I am looking for very basic animation to accompany a song and photos that I will overlay later. I want the video to essentially go in a straight line, with a simple cartoon image (white board style animation) of a young girl who passes by people as she ages in different scenes. At first, the girl will face a few people who bully or ignore her, perhaps, maybe call out to her and that discourages her, but as the animation progresses and she gets older, I want her to start reaching out to the people that she passes, and have some of them to begin following her, until the scenes progress and she reaches adulthood and a large crowd of people (her supporters) have assembled around her. At adulthood, she climbs a podium to face them, now as an adult, and turns to face them as the [login to view URL] of the United States. As she turns to face the crowd, I want everyone in the crowd who had walked with her throughout the video, to hold up red, white, and blue signs, balloons, voting buttons - whatever is easiest to portray. The whole video needs to be around 2:30-3:30 minutes.

This story board can be condensed, but is what I have in mind. .

1:00 - Young girl - excited, bouncing around, carrying a balloon around, but is getting no reaction from anyone she passes. As she keeps walking, her head and shoulders start to slouch

2:00 - teenager - Still persistent, comes across a few more people, and as she continues to interact, some people begin to respond - to follow her. .

3:00 - adult, - She is starting to have a large crowd around her now, and her confidence is growing. She's speaking to people, passing out flyers, or buttons.

3:30 - reaches the stage to face the crowd, releases a balloon out into the crowd that another little girl catches

This is a political video, so I need the overall theme to reflect that. (i.e. red, white and blue stage at the end, American flag.) It doesn't need to be overly patriotic and Americana, but I just want to see that theme conveyed. The objective of this video is to inspire little girls that they could be president when they grow up.

“Tinxie was the second freelancer to submit an entry for my contest, and immediately incorporated the feedback I have and resubmitted a second video while the contest was still running, taking every piece of feedback I gave into account. After I awarded the contest, Tinxie made additional changes until the original fuzzy storyboard image I had when I began this contest materialized into a professional and polished video. To say Tixie went above and beyond is a complete understatement. With my rambling ideas, and vague instructions, I ended up receiving a video that was exactly what I pictured in my mind and that to me says that Tinxie is an incredibly talented designer and freelancer. I couldn't be happier. ”