A Life Beyond the Call of Duty

For former Armed Forces engineer David Yiallouros, opening a deli was a no-brainer. Prior to joining the Army, he worked as a cook in restaurants and hotels. “I have always loved food and entertaining,” he admits. “The business I knew I had to start was a food-based business.” 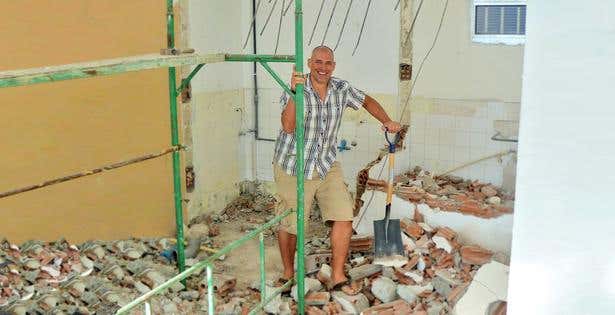 So, when he moved to Limassol, Cyprus, he finally took the plunge—and Mia Delicy was born. Serving as the deli’s Managing Director, David felt that with the current financial climate in the country and the strong solidarity among its residents, Cyprus was ready to launch its own quick service restaurant brand. “Cyprus loves the franchises from around the world but there was no brand to call its own,” he says. David registered Mia Delicy as a limited company because he believed that this would assist the business in being taken seriously by suppliers and customers.

Mia Delicy is a deli concept that focuses on delivering a variety of home-style cuisine made of the finest ingredients. The name is a play on words:  mia, which is often used when a person in Cyprus is asking for one of something; deli, the business’s prominent feature; and CY, Cyprus’s unique country identifier. In other words, “Mia Delicy” is “One Deli Cyprus.”

To set his business in motion, he needed to have an identity that would reflect the company’s fresh new approach to fast food. So, he went to Freelancer.com, the world’s most preferred crowdsourcing and outsourcing site, and staged a logo contest that attracted 266 sketches and prototypes from artists from all over the world.

“I originally joined Freelancer when I was tinkering in web and iOS app design, having read about the platform in an iOS application design book,” recalls David. “I came quickly to the realization, however, that there were far more talented individuals out there who were prepared to provide great value.”

The winning entry had an orange and green palette and highlighted the deli’s main selling point—fresh produce. The success of the logo contest confirmed  the quality of the talent pool available on Freelancer.com. “I was also aware that the contest would provide value for money.” So, it didn’t come as a surprise that he used the platform again for the restaurant design.

“The restaurant design was complicated,” he explains, “and as I was trying to explain elements to contractors I realized there were gaps in the architectural plans that meant my vision was at risk of being watered down by contractors who were unable to understand my vision clearly. The only way I could limit this confusion was to provide my vision in full Technicolor.”

David was familiar with 3D visualization and considers himself as a reasonable 3D modeler. However, he says, “I knew this was beyond my skill set and spending time to learn this would detract me from my primary focus.”

Encouraged by the results of his logo contest, he held another for 3D mockups of the shop design. He received 15 entries, and after spending hours scrutinizing their past work and feedback from previous employers, he shortlisted the candidates to three designers, and eventually chose between two frontrunners. “We needed someone who had the patience to play around and create something eye-catching, beautiful and representative of our ethos.”

The winner, Skylarkstudio, represented by Soumya, had never taken on a project like David’s, but the team’s passion and commitment to excellence shone through in their communications via the site’s messaging system. He went with his gut. “Our vision was 85% there, but Soumya convinced me that he would stick with us through the remaining variable.” The selection, in his words, was a “heart over head” decision. “Passion won over process and the tools Freelancer.com provides, when used effectively, allow you to take the risk,” he asserts. “I felt protected enough by the Milestone Payment and the redress procedures should an issue arise. This gave me the confidence to take the leap of faith with Soumya and his team.  It was a gamble that paid off.”

He further adds: “Without Freelancer, I would have had to pay four or five times the cost of this project. The local companies were charging at least €3,000 for fewer renders and far less flexibility. I estimate that I have saved over €2,000 on this project. Hours of my day have been returned to me and time is a most valuable commodity when starting a business. The extent of the talent provided by Freelancer.com is one of its most attractive assets.”

Camille Reed, an employee turned entrepreneur, hired a freelancer to build her a website and hopefully bring her business to the MVP level.

As an entrepreneur, there’s a lot of things you need to keep in mind to have a successful business, including legal issues, Here are tips for you.

Before starting your business, read these masterpiece books that will provide you with a strong foundation of knowledge and motivation.